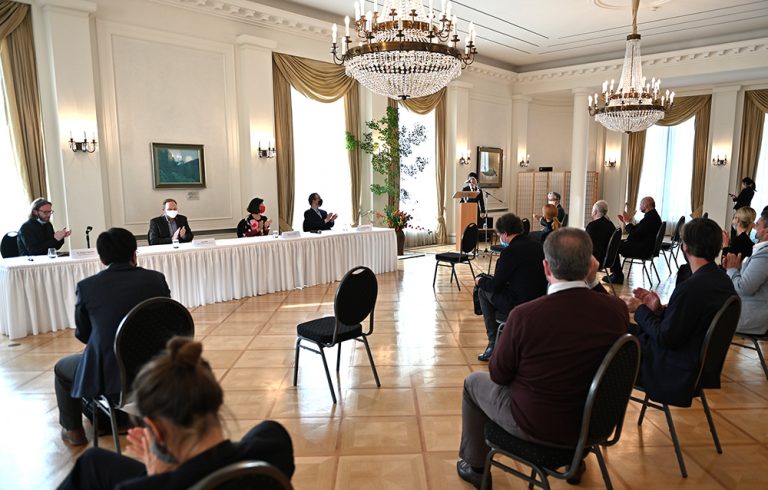 Berlin, October 1, 2020 – On the occasion of World Sake Day, which heralds the start of sake production in Japan, Sake Embassy Germany was registered with the register of associations today in Berlin as a non-profit and independent industry association. The association would like to bring the topic of sake closer to the catering and hotel industry, but also to end consumers, and today presented the first concrete projects for 2021.

For the first time there will be a Sake Week Berlin, which starts on World Sake Day 2021. For seven days, various events for trade visitors and end consumers with tastings, workshops and lectures will be held. In addition, up to 20 participating restaurants will offer special menus with sake accompaniment and show that sake is the perfect accompaniment to the menu and does not have to be drunk exclusively with Japanese food. From 2022 there will also be Sake Week in Düsseldorf and Frankfurt a.M. In this context, World Sake Day is being established step by step as a further milestone in the Germany-wide bar event calendar.

As part of a gastro promotion, a content-related bridge to Japan will be built for restaurateurs, hoteliers and bar operators in the Olympic year (Tokyo 2021) and specific drink suggestions will be made, which can be offered from the end of March 2021. These include sake tonic and various sparkling wine sake creations (e.g. Cava Sake, pronounced “Kawasaki”) with cherry blossom, yuzu and cassis.
The positioning of sake pure will take place in the communication and in workshops as “liquid meditation” and thus contributes to the appreciation of the drink from the production to the consumption as well as a conscious consumption. Special sparkling sake is positioned as an exclusive alternative to champagne.

Further projects and tools, such as an online Sake Germany map, which also helps to find restaurants, bars, hotels and shops via smartphone, are already being developed.

The initiator of the founding is Alexander van Hessen, who launched the Berlin Food Week back in 2012 and has implemented it to date together with Schröder + Schömbs PR. Other founding members of Sake Embassy Germany e.V. and members of the advisory board are: Alexander Angelus (Embassy of Japan in Berlin), Dr. Bastian Schwithal (Go-Sake), Arnd-Henning Heissen (Bar Manager and Consultant), Herbert Schmitz (Schröder + Schömbs PR), Jörg Müller (Ueno Gourmet), Yoshiko Ueno-Müller (Sake & Shochu Academy Europe). In addition, the advisory board is supplemented by: Goya Kobayashi (Yamagata Prefectural Government) and Nicole Renger (JETRO – Japan External Trade Organization Berlin).